There has been a lot of talk about “stagflation.” What does that mean? 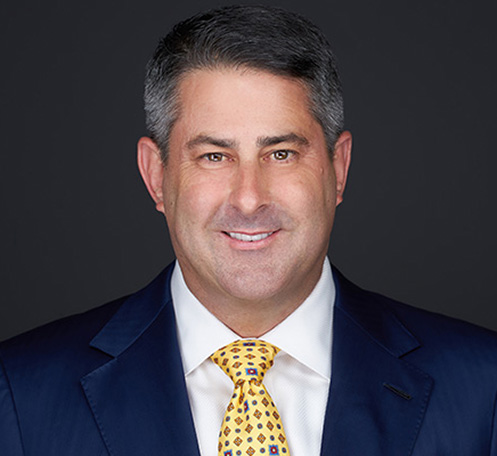 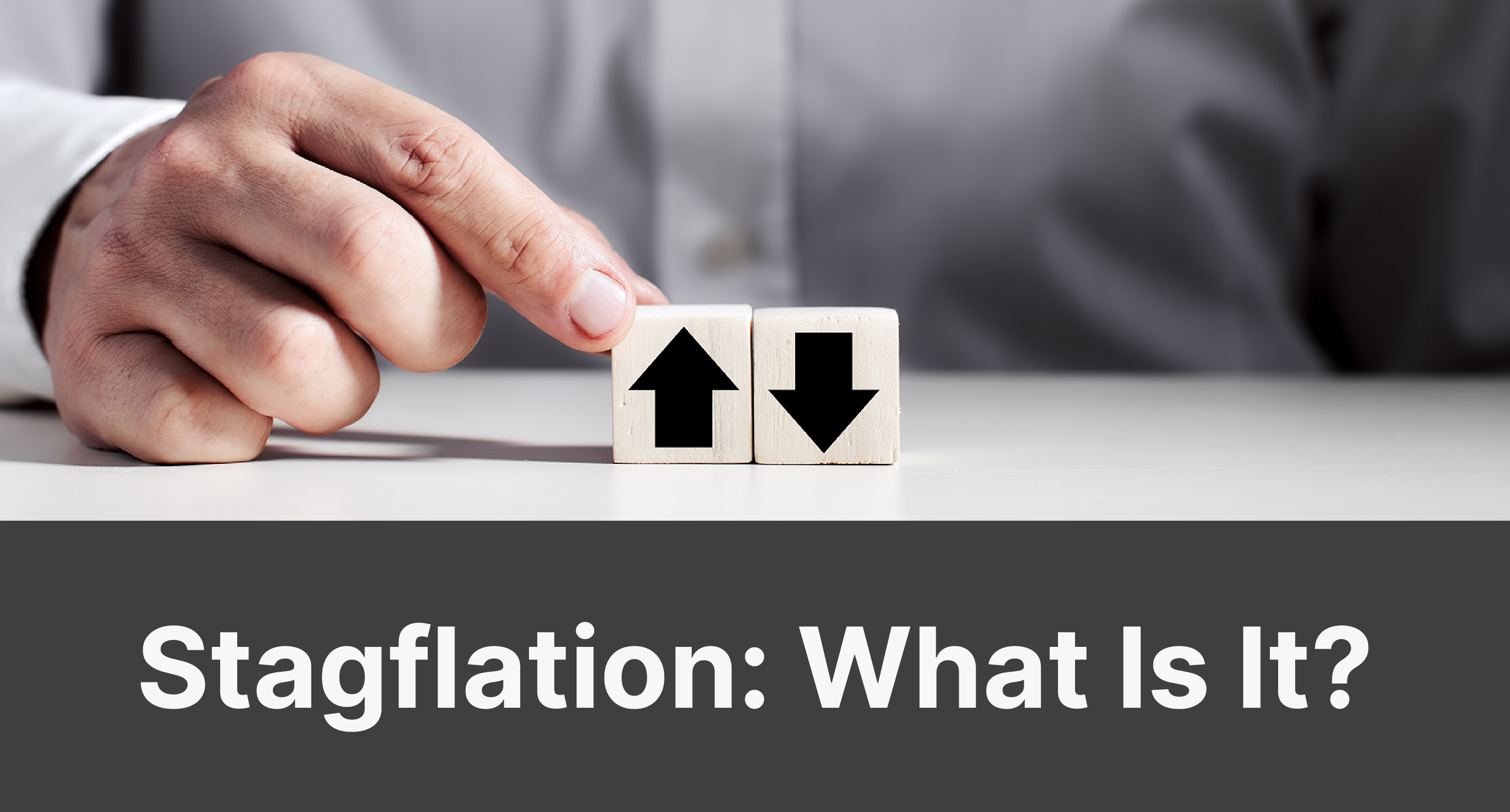 Typically, when such things occur, confidence in the economy falls, which prompts falling wages and rising unemployment. In 2022, while general confidence did drop to the point that the New York Times reported, “Americans generally feel as bad about the economy as they did during the Great Recession of 2008,” wages kept rising and the unemployment rate stayed low. However, some experts are concerned that we may be nearing a period of stagflation.

‍Stagflation is a mashup of “stagnation” and “inflation.” It describes an economy in which inflation continues to rise despite low or no economic growth and high unemployment. Since we already have high inflation and negative growth, if a large number of people were to lose their jobs, we could enter a stagflationary period.

Knowing this, you might suspect the Federal Reserve or even the federal government would work to avoid stagflation, but that’s harder than it sounds because the phenomenon is incredibly rare. The last stagflation period the United States endured was in the 1970s. Because it’s so uncommon, it’s difficult to say with certainty what causes it, which means it’s equally hard to prevent stagflation.

‍We can look back to stagflation nearly 50 years ago as an anecdotal guide to factors that may contribute to it today. In the early ‘70s, President Nixon took the United States off the gold standard, which allowed the value of the dollar to become more volatile. The subsequent decline in the dollar’s value started an inflationary rise that continued throughout the decade.

That inflation was then exacerbated in 1973 when the Organization of the Petroleum Exporting Countries (OPEC) declared an oil embargo against the United States. This caused gas prices to skyrocket. Businesses reacted by both increasing prices and decreasing production, driving inflation to stratospheric levels not seen since 1947. Prices continued to rise despite a sharp increase in job layoffs. This was the situation that gave rise to the term “stagflation.”

Similarities Between the 1970s and Today

‍There are a number of parallels between the economy of the 1970s and today. Inflation has increased dramatically, though not as drastically as in the ‘70s. The economy has experienced two quarters of negative growth, which meets one definition of recession. Both of those situations were partially caused by soaring gas prices. The 1970s increases were due to OPEC’s embargo, and the price spikes in 2022 were the result of Russia’s war against Ukraine.

Today’s economic news sounds eerily similar to the 70s, but there are key differences to note. One change is the Fed’s reaction to inflation.

This year the Fed raised target interest rates four times between March and July and has signaled willingness to do so again throughout the rest of 2022 and into 2023. In the 1970s, however, the Fed was slow to react to soaring inflation. When it finally took action, a “stop-go” policy was implemented in which target interest rates would be raised significantly for a very short time, then dropped back down.

This policy proved a dismal failure at curtailing inflation, which would continue its meteoric ascent until 1979, when a new Fed chair, Paul Volcker, significantly raised interest rates and kept them high. This caused a recession but did finally bring inflation down to normal levels.

Combining the differing Fed reactions to inflation with today’s low unemployment rate shows that the current situation, while uncomfortable, is not identical to conditions in the Age of Disco. This makes it difficult to assume whether or not stagflation will occur. But what would result if it were to happen?

‍If stagflation does happen in the near future, most experts don’t think it will be as bad as the1970s episode. Job losses will likely be less severe, and inflation is similarly unlikely to be as drastic. However, it’s still a good idea to prepare.

Beef up your emergency fund. Try to keep at least six months of living expenses in an easily-accessible account. This can help you weather a job loss or an unforeseen emergency like a medical bill or home repair without having to dip into your retirement accounts.

Pay off adjustable-rate debt. Higher interest rates mean you pay more every month for debts like credit card balances. While being careful not to neglect your retirement account contribution, it’s a good idea to concentrate on paying down variable-rate debt when interest rates are in flux.

Consider Partnering with a Professional

At Asset Preservation Wealth & Tax, we routinely work with clients to help them take advantage of the good times while remaining prepared to weather the bad ones. I’ve had a lot of nervous clients ask about stagflation this year, wanting to know if it will happen and what they should do about it.

While no one can predict when it might occur, you can take steps to prepare your finances should stagflation happen. The good news is that even if stagflation doesn’t materialize, getting ready for it means you’ve made your finances healthier. That’s always a good idea!

Predicting the future isn’t possible, but you can still do your best to prepare for all eventualities. Working with a financial advisor can help you plan for an unpredictable future and work toward a successful retirement.

The commentary on this blog reflects the personal opinions, viewpoints and analyses of the author, Stewart Willis, providing such comments, and should not be regarded as a description of advisory services provided by Foundations Investment Advisors, LLC (“Foundations”), an SEC registered investment adviser or performance returns of any Foundations client. The views reflected in the commentary are subject to change at any time without notice. Nothing on this website constitutes investment, legal or tax advice, performance data or any recommendation that any particular security, portfolio of securities, transaction or investment strategy is suitable for any specific person. Personal investment advice can only be rendered after the engagement of Foundations for services, execution of required documentation, including receipt of required disclosures. Any mention of a particular security and related performance data is not a recommendation to buy or sell that security. Foundations manages its clients’ accounts using a variety of investment techniques and strategies, which are not necessarily discussed in the commentary. Any statistical data or information obtained from or prepared by third party sources that Foundations deems reliable but in no way does Foundations guarantee the accuracy or completeness. Rates and Guarantees provided by insurance products and annuities are subject to the financial strength of the issuing insurance company; not guaranteed by any bank or the FDIC. Investments in securities involve the risk of loss. Any past performance is no guarantee of future results. Advisory services are only offered to clients or prospective clients where Foundations and its advisors are properly licensed or exempted. For more information, please go to https://adviserinfo.sec.gov and search by our firm name or by our CRD # 175083.‍

You spent all your working years accumulating this wealth. Now it’s the time to make the most of it. 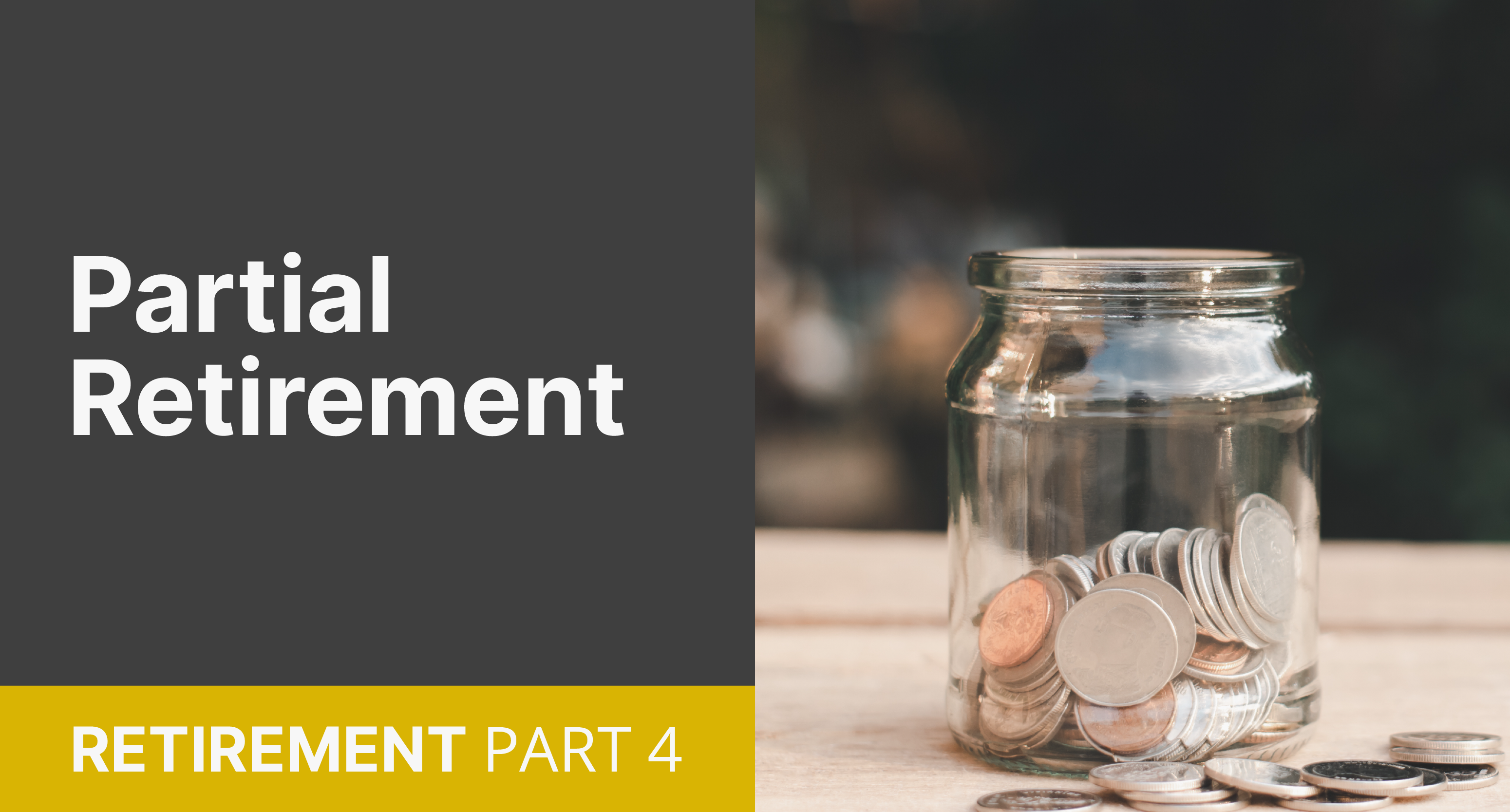 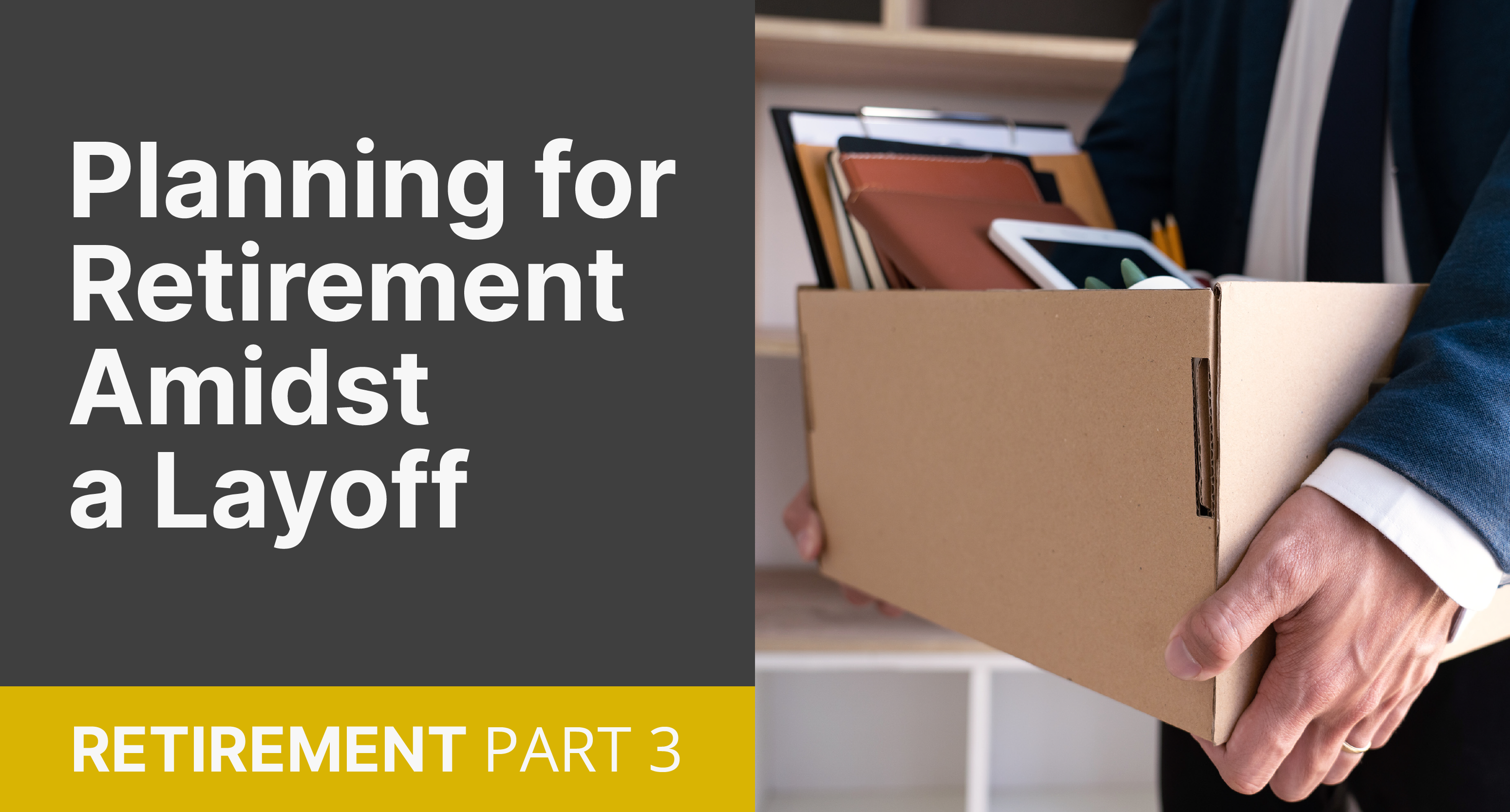 Retirement Part 3: Planning for Retirement Amidst a Layoff 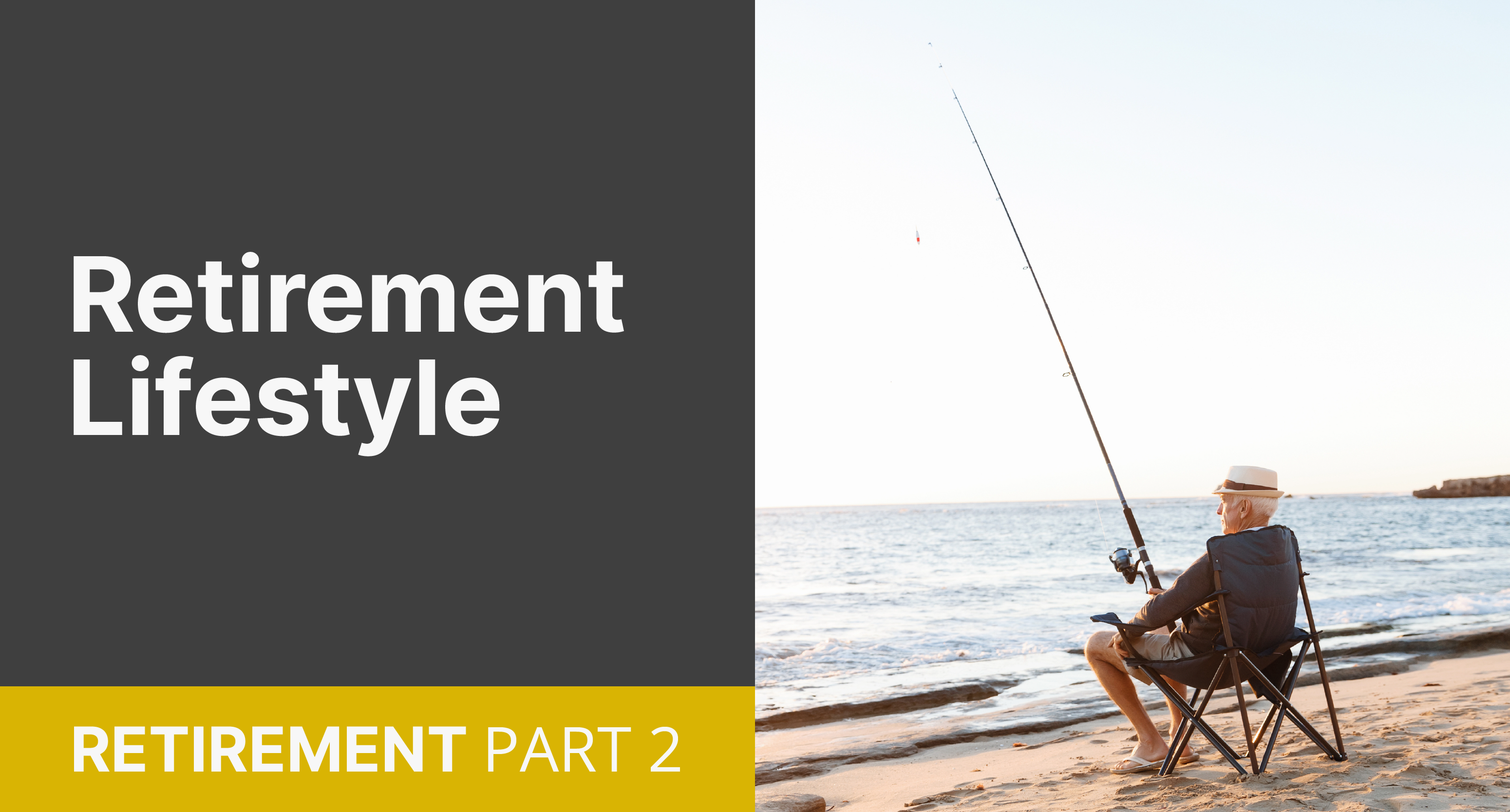